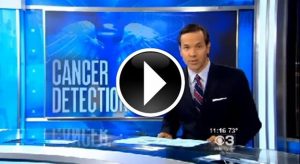 Ovarian cancer is the fourth leading cause of cancer death in women. When diagnosed early, ovarian cancer has a 5-year survival rate of greater than 90%. However, more than 80% of patients are diagnosed at a late stage when even aggressive treatment with surgery and chemotherapy are unable to stop the cancer. 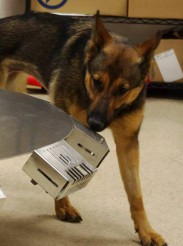 Tsunami training on the
Anne B. Kingsley wheel.
Donated by
Granville German Shepherds

Any advance that can accurately detect ovarian cancer in its early stage can have a great impact on overall survival. We hypothesize that the odors emanating from ovarian tissue will provide a reliable, detectable substrate for early detection, allowing more effective treatment. We are now looking at odors emanating from blood samples of patients with ovarian cancer.

This project will compare the ability of canine and other sensors to detect the unique signature of serum samples from ovarian cancer versus control patients.  We also aim to identify what specifically distinguishes diseased from healthy samples.  In addition, we will determine which sample type (serum, vaginal secretions, urine or exhaled air) is most effective and accurate for screening.

1. Determine the sensitivity and specificity of dogs in detecting and distinguishing plasma samples from patients with ovarian cancer versus patients with benign gynecologic growths and healthy controls.
2. Identify the type and relative amounts of the volatile organic compounds which distinguish diseased from non-diseased plasma samples.
3. Test whether or not the target volatile organic compounds emanating from plasma samples is what is identified by the dogs.
4. Develop an electronic sensor array platform that will serve as the front end of a prototype e-nose system to be used in ovarian cancer detection.