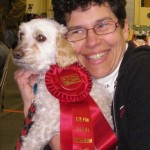 She has published over 60 articles in peer reviewed journals, authored over 10 book chapters and lectured nationally and internationally on Emergency Medicine, Disaster Medicine and Working Dogs.

She has also been involved in disaster medicine as a member of the Veterinary Medical Assistance Team – 2 since 1999.

Dr. Otto is board-certified in both veterinary emergency and critical care and veterinary sports medicine. She is a tenured associate professor of Critical Care at the University of Pennsylvania, School of Veterinary Medicine and was named Pennsylvania’s 2002 “Veterinarian of the Year” and received an Alumni Recognition Award in 2006 and the OSU Distinguished Alumus Award in 2008 from the Ohio State University.
She is involved in dog sports (flyball, agility, and tricks), and also provides pet therapy in the Philadelphia area, with her rescued Bichon mix, Dolce.