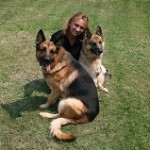 Major Annemarie DeAngelo retired from the New Jersey State Police in January of 2012, concluding a distinguished thirty-one year career. She was assigned to patrol, canine, investigation and administration before rising to the command staff positions of Executive Officer in the Homeland Security Branch and Field Operations “Troop C” Commanding Officer.

Annemarie was the founder and architect of the New Jersey State Police Canine Unit. She began training dogs for obedience and personal protection under the guidance of a military canine trainer in 1980. That experience steered her law enforcement career and she became the first NJSP narcotic dog (Buddy) handler. For the next 13 years she served in the Canine Unit as a handler, trainer, and ultimately unit leader. She earned trainer certifications from both the New Jersey Attorney General’s Office and the United States Police Canine Association. She is an active canine trial judge and advocate for law enforcement and civilian canine organizations.

Annemarie and her canine partner “Buster” were awarded the National Detector Dog “Case of the Year” for an investigation and scent detection that led to the seizure of 1,200 kilograms of cocaine concealed in a tractor trailer. She was also the recipient of the prestigious “Gene Catre Memorial Award” presented by The College of New Jersey Criminal Justice Department for career contributions to the law enforcement community.

Annemarie earned her Masters of Administrative Science degree from Fairleigh Dickinson University where she also earned a graduate certification in School Security and Safety Administration.